Think and Grow Rich in 13 Steps
by Ahryn Scott 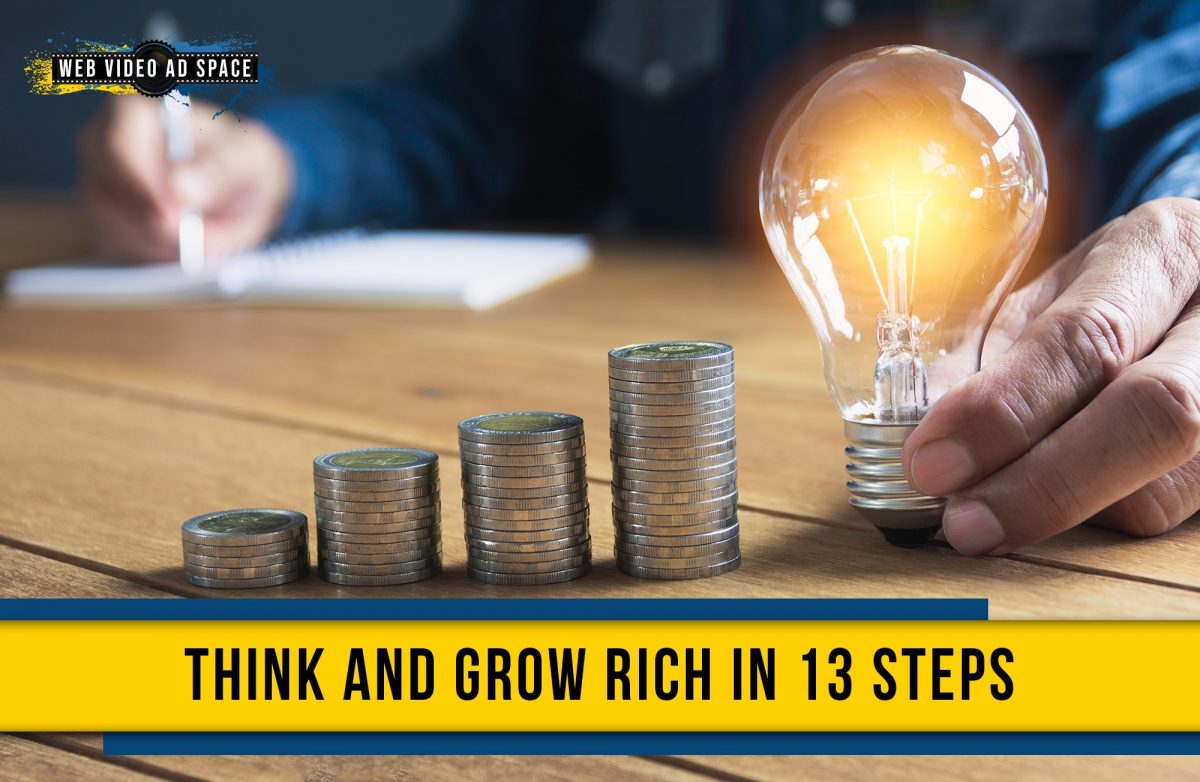 I read Think and Grow Rich years ago. In fact it was about the time I started my business in 2009. It made a big impact on me then. The wisdom documented by Napoleon Hill is as true today as when he wrote it all those years ago.

I hadn’t thought much about Think and Grow Rich until my Uncle sent me an article about Napoleon Hill. It rekindled my appreciation for Hill’s teachings. As a result, I decided to use them as inspiration for this post. Here they are:

“Wishing will not bring riches. But desiring riches with a state of mind that becomes an obsession, then planning definite ways and means to acquire riches, and backing those plans with persistence which does not recognize failure, will bring riches.” – Napoleon Hill

#2 Faith: Believe that you can achieve your goal.

“Riches begin in the form of thought! The amount is limited only by the person in whose mind the thought is put into motion. Faith removes limitations!” – Napoleon Hill

#3 Auto-suggestion: Use affirmations to reach your goal.

“Your ability to use the principle of auto-suggestion will depend, very largely, upon your capacity to concentrate upon a given desire until that desire becomes a burning obsession.” – Napoleon Hill .

I have to admit, I’ve never been very consistent with affirmations. I’ve used them before, but eventually I feel silly. Doing this series has caused me to reconsider these principles. As I read it today, the power of these is to focus the mind on an outcome. I know wildly successful entrepreneurs who swear by affirmations. I think I’ll start again.

“Successful men, in all callings, never stop acquiring specialized knowledge related to their major purpose, business, or profession. Those who are not successful usually make the mistake of believing that the knowledge-acquiring period ends when one finishes school.” – Napoleon Hill

#5 Imagination: Come up with ideas and visualize your success.

“Ideas are the beginning points of all fortunes. Ideas are products of the imagination … Man’s only limitation, within reason, lies in his development and use of his imagination.” – Napoleon Hill

“Whoever you are, wherever you may live, whatever occupation you may be engaged in, just remember in the future, every time you see the words ‘Coca-Cola,’ that its vast empire of wealth and influence grew out of a single idea,” – Napoleon Hill .

“Opportunity has spread its wares before you. Step up to the front, select what you want, create your plan, put the plan into action, and follow through with persistence … Most of us are good “starters” but poor “finishers” of everything we begin. Moreover, people are prone to give up at the first signs of defeat. There is no substitute for persistence.” – Napoleon Hill

It amazes me how simple these principles are and at the same time, how powerful too. Take action on an organized plan… Boom! The more things change the more they stay the same.

“People who fail to accumulate money, without exception, have the habit of reaching decisions, if at all, very slowly, and of changing these decisions quickly and often.” – Napoleon Hill

This is a really an important life lesson and I struggle with this. It was worse when I was younger. I wonder if part of it has to do maturity and responsibility.

#8 Persistence: Don’t stop until you get what you want.

“Riches do not respond to wishes. They respond only to definite plans, backed by definite desires, through constant persistence.” – Napoleon Hill

My dad used to say, “businesses don’t fail, it’s just business owners who give up.” Don’t give up!

#9 Power of the Master Mind: Surround yourself with the best.

I think the concept of a master mind is fascinating. If our brains are neural nets, then a mastermind is a net of neural nets – very powerful.

#10 The Mystery of Sex Transmutation: Choose a compatible partner.

“Sex desire is the most powerful of human desires. When driven by this desire, men develop keenness of imagination, courage, willpower, persistence, and creative ability unknown to them at other times. Love, romance, and sex are all emotions capable of driving men to heights of super achievement. When combined, these three emotions may lift one to an altitude of genius.” – Napoleon Hill

Sex… It’s what makes the world go round. Hill’s quote needs an update to account for sexual equality, but despite the outdated world views, he’s right. The right partner makes all the difference. Here’s to finding the partner or least enjoying the process.

“The subconscious mind will not remain idle! If you fail to plant desires in your subconscious mind, it will feed upon the thoughts which reach it as the result of your neglect. Positive and negative emotions cannot occupy the mind at the same time. One or the other must dominate. It is your responsibility to make sure that positive emotions constitute the dominating influence of your mind.” – Napoleon Hill

It’s easy for me to believe negative thoughts are protective. All the “what if’s” allow me look at the possibilities and choose the right path. The criticism and judgement allow me to take my game to the next level. This just makes sense to me, it seems like smart thing to do.

Most of the time I’m indulging in negativity. I think I’m being “practical.” Instead, I’m feeding my mind negative thoughts. This is a hard habit to break. If I stay there too long, I can go into a funk. I was there yesterday.

What helped me was faith in the apparently irrational belief that there is nothing to fear… that everything will work out as it should… that I am adequate for the coming challenges.

In other words focusing on, and believing in the positive.

#12 The Brain: Associate with other smart people and learn from them.

“Every human brain is capable of picking up vibrations of thought which are being released by other brains … The Creative Imagination is the “receiving set” of the brain, which receives thoughts released by the brains of others.” – Napoleon Hill

I wouldn’t get hung up on the scientific validity of the above statement. However, from a practical point of view this is how it feels. How do you feel interacting with intelligent, dynamic people? It’s electric, right?

New connections are being made leading to new ideas. The heart of innovation. Btw, I think it’s funny how Hill says, “and learn from them.” Just to clarify that hanging out and partying with them is not sufficient.

“Through the aid of the sixth sense, you will be warned of impending dangers in time to avoid them, and notified of opportunities in time to embrace them.” … “No matter who you are, or what may have been your purpose in reading this book, you can profit by it without understanding the principle described in this chapter.

This is especially true if your major purpose is that of accumulation of money or other material things. The chapter on the sixth sense was included, because the book is designed for the purpose of presenting a complete philosophy by which individuals may unerringly guide themselves in attaining whatever they ask of life.” – Napoleon Hill

I think he left the best for last. How about you?

The article that inspired this list can be found here… 78 years ago, a journalist studied 500 rich men and boiled down their success into 13 steps